What did I see?
I'm almost in the mood for Halloween (Which goth isn't?) although the move stops me from decorating anything. So I might put my gothy decorations up here in my blog and maybe later in the new flat! Atomic Pixies made a lovely picture of the "Scream Queens" - Do you recognise all of them? 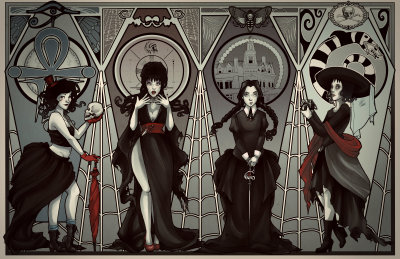 What did I listen to?
Finally done with the apocalyptic stuff! Now it is back to music - Love like Blood - Dying Nation. During the 90s there was a time where right wing people in Germany gained confidence and started physically attacking foreigners. There were many songs by left wing bands who are still present in my mind today. This is one of them. I'm kind of more afraid of these people today than with 10 years. And I feel equally helpless...

What did I ask myself?
How can one person have so much fabric? I should ask myself, right?

What did I read?
Die Go-Go-Girls der Apokalypse (= "gogo girls of the apocalypse") by Victor Gischler. There is no English translation of this German book, but fortunately you are not missing out on much. The story is centered around Mortimer Tate who survives the end of the world when he hides from his wife in the woods when she wants a divorce. Now, 9 years later he returns to civilisation when he grows tired of beef jerky. He runs into cowboys, evil humans, profiters and -of course- gogo girls. The story is nice, but not very catchy. And the characters are mostly not very relatable. I got the book for 1 Euro which it was completely worth. Not much more though, I'm afraid! ^^

What did I work on?
A skirt and a shirt

I was happy about...
I got the keys to the new flat (finally!) and didn't completely hate it when seeing it the second time! Yay!

I was annoyed about...
All the organisational stuff. Being adult sucks so hard!

What did I see?
I'm always happy to support aquaitances. Although I think that Royal Black doesn't need much of a support since her work speaks for herself! She makes the most awesome corset designs with impeccable fit. See for yourself: 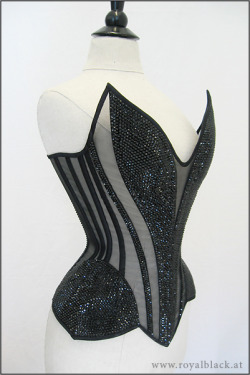 What did I listen to?
You wouldn't believe it -  J.L.Bourne Diary of the Apocalypse 3 (German Version)

What did I ask myself?
Now that my motivation is back - Why don't I have time to sew?!

What did I read?
Work stuff

What did I work on?
Nothing - Well, I copied a pattern, but had not time to cut the fabric

I was annoyed about...
Doing the dishes. I'm so looking forward to having my dish washer back!

I really needed some time to get through my blogroll, with all the packing and shopping and organizing, time is really a precious resource. BTW, I didn't forget that I owe you pictures of my TKMaxx haul and new sewn things, but I somehow miss my camera battery charger and also ran out of webspace for pictures. Any recommendations?

I'm writing today because I just realised that Ramona of Justkeepthebrains gave me an award, thank you sweetheart:

1. Why did you start to blog in the first place?

I started to blog in 2009 originally to have some fun with outfit pcitures, but the blog soon eolved into a diary for stuff I make and do. I often have the feeling that I don't achieve anything and never finish anything I start. The blog keeps track of stuff I made and helps me to see that I actually do finish things. And it really works!

2. What is your favorite book?

I hae written about this before, but my favourite book is "Spares" by Michael Marshall Smith. It contains, spaceships, war, robots, clones love and a broken detective, all mixed up to a story which you can't lay down once you started reading!

Here is the text on the back cover:
Coma meets Blade Runner in this future noir thriller, a compulsively readable melding of hardboiled narrative and hardware invention. Smith forecasts a decadent future in which the rich clone themselves at birth and callously harvest replacement organs from their "spares" as they need them. Narrator Jack Randall, a debauched but conscientious ex-cop, flees to the megalopolis of New Richmond with seven clones he has liberated from a spare farm and is almost immediately relieved of them by a gang of thugs. Jack's efforts to find out who has abducted the spares and marked them for death plunge him into a mystery that ultimately links the two events that have shattered his life: the brutal unsolved murder of his wife and child, and his soul-searing tour of military duty in The Gap. A virtual world built from the flotsam and jetsam cluttering the Internet, The Gap is an awesome conception made to seem supernaturally eerie yet scientifically feasible. Smith elaborates this creation brilliantly, as a surreal battleground where Jack confronts the demons that have haunted him for a decade, and as a symbol of emptiness and waste that brings the novel's numerous depictions of personal and social devaluation into sharp focus. Both a disconcerting portrait of a future that might be, and a poignant study of one man's fight to resist it, this novel augurs a promising future of another sort for its author.

3. What do you dislike the most?

Intolerance and stupidity. Not necessarily in that order. I don't know if I hate any of the two more, but sometimes I hate myself for being stupid. So I sometimes hate myself a bit, but at least I try to avoid intolerance! ^^


4. What’s your favorite food item from the mall?

That's hard. I love fusion food, preferably asian fusion. There is a food ventor called soul food who has amazing burgers and sweet potato fries to die for. I also love sushi. And udon. Actually, I'd eat almost anything, depending on the mood I'm in! ;)


5. What is your favorite past time activity?

Again, I find it hard to decide that. Spending time with my boyfriend, friends and family? Reading? Sewing?  So much things to do, so little time!

I won't nominate anyone because most people I'd nominate either are already nominated and the rest of them won't waste time answering questions... If you are interested, just pickup the award and answer the questions! :)
Eingestellt von MindLess um 5:00:00 PM 4 comments: Links zu diesem Post

Email ThisBlogThis!Share to TwitterShare to FacebookShare to Pinterest
Labels: more about me

What did I see?
Ya'll know how much I'm into handiworks and hand sewing? Well, I'm really tempted to do it once we moved. I simply love the creepy cute designs by TinyCup Needlework! 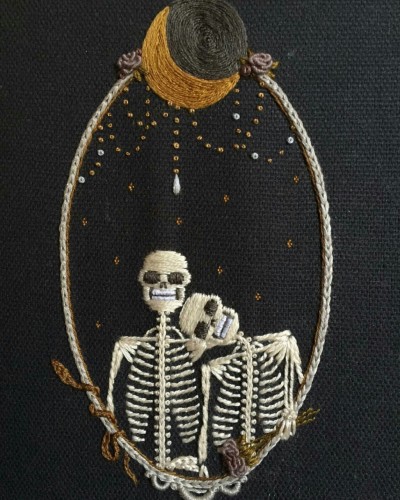 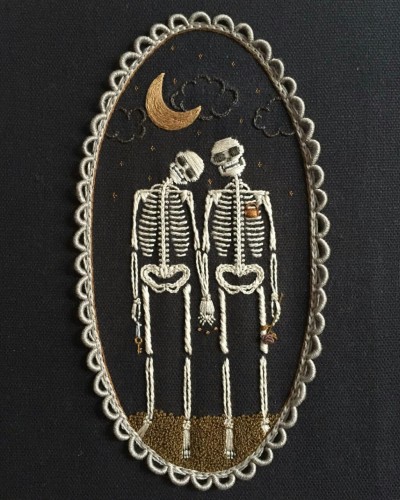 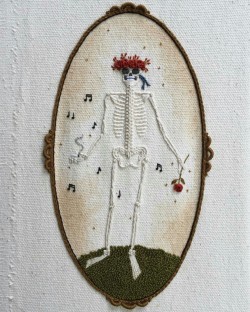 What did I listen to?
J. L Bourne - 2nd Diary of the Apocalypse. (German version) Both books are actually pretty good! Looking forward to the third diary!

What did I ask myself?
What became of no more shopping until the move?

What did I read?
Pittacus Lore "United as One", the last of the Lorien series. Good as always, both my boyfriend and me are fans of the series and enjoy the books about teenagers from outer space fighting on (and for) earth!

What did I work on?
Nothing, but I have good plans now!

I was happy about...
More kissing my boyfriend and spending time with friedns this weekend!

I was annoyed about...
My lazyness. Still I need to work on that. But I'll do!

I used the rest of the silk cotton fabric to make another top. I thought that making a work appropriate top would be a good idea, so I used view D with the sleeves of view B from McCall's 5661.

In the back you can see that the shirt is still lacking closure. I can't decide between mother of pearl buttons or KAM Snaps. And which snaps to use - black or white?

Like in the last shirt, I gave my all to make the insides just as pretty as the outside. I won't get away with wearing this shirt inside out, but I somehow felt that this fabric was worth the little extra effort.

What did I see?
My luck with Halloween stuff at TKMaxx changed and I got the first items from there... I willl show what I got next week! Right in the spirit of Halloween, I saw these Tribute pictures to Tim Burton by Marie Bergeron. A fall and creepiness, how much I missed you? What did I listen to?
J. L Bourne - Diary of the Apocalypse. (German version)

What did I ask myself?
Where did that lazyness come from? Is this procrastination from the huge tasks before me?

What did I read?
New Darwin awards - A mindless read during waiting time at Ikea.

What did I work on?
Walls and cupboards

I was happy about...
Staying with my boyfriend for one week. Fixing a moving date. Only one more month of distance relationsship (not long distance because I've heard of worse)

I was annoyed about...
My lazyness. I had one week to do stuff and did so little.


I bought...
A little fabric, Halloween towels and bowls.

What did I see?
We're coming closer to autumn and that means - Halloween! I already visited TK-Maxx but had no luck with Halloween stuff. But Daniel Horne made an amazing series on the classical movie monsters which makes me long for falling leaves and evenings on the couch with hot cocoa and a monster movie! What did I listen to?
In Extremo - Liam

What did I ask myself?
Am I expecting too much?

What did I read?
Nothing

What did I work on?
Two tops, one finished

I was happy about...
Doing something productive again