To be honest with you, The taille of the crinoline outfit really killed my sewing mood for several days. The front made no problem, but the back is a totally different topic... *sigh* So while I was demotivate from what should have been worn nearly a month ago, I decided to do some small in between projects that will be easy and make me hate sewing a bit less.

Enter the cell phone hammock. I saw them on several blogs -for example the one from Natron- and since my cell phone is a smart phone which needs to be recharged every night (unlike my "stupid" normal phone which I charged about once a week), I thought that a device that keeps me from accidentally stepping on my cell phone and that keeps the cable mess at bay would be a good idea. 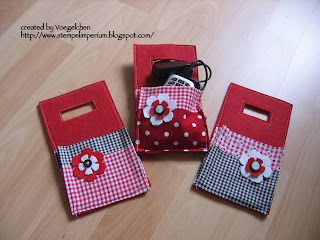 As you see, the pattern is fairly simple: Just cut some form (rectangle or circle), add a pocket for the cell phone, cut a hole for the charger and you are set. So this is what I did. I actually cut the same for my boyfriend, so we have cell phone hammock twins! ^^

Oh, I love this! I'll have to make one for myself one of these days!

@ Xanthy: Oh, please show it on your blog, then!