Here is my "nothing to wear" for saturday: 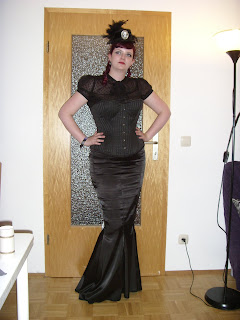 It was really nice, although we were to late to see XR-X - when we were inside and in front of the stage, they played there last song. Bummer, but we heard everything from outside!
I saw a lot of bands on saturday - Samsas Traum (I like to music, but the singer is mental), Tanzwut, Suicide commando, deine Lakaien (<3), Frozen plasma (which I liked better than before in the Matrix) and Staubkind (boring...).
There were a lot of sellers at the Amphi; at Cyberloxx I met Rubicon and Trisha, Wu was also running around and promoting his label Re-agenz. At the Elfenrausch boot I spent some money I don't have on little earrings with my logo spider. Later on I met Alex from Eisbrecher (but didn't talk to him as he was surrounded by fans) and edid my makeup next to Ophelia Overdose. She seems nice but not the brightest...
I also went to the Natron & Soda CT and hat a very nice chat to a lot of people... It started to rain in the evening which made the Lakaien concert somewhat less nice, but the BF and I stood under the umbrella and listened to Veljanov's voice as long as we could take it!
Eingestellt von MindLess um 5:00:00 PM

you looked hawt, my dear :D

it was great seeing you again <3

I love the skirt. I've been looking for some tips how to make it. Could you give me some, please, or is it your special secret? Anyway, it's gorgeous.

@ Anonymous: If you speak German, you could use the same tutorial I used to make it:

Otherwise, you could searcg for a "fishtail skirt" tutorial...